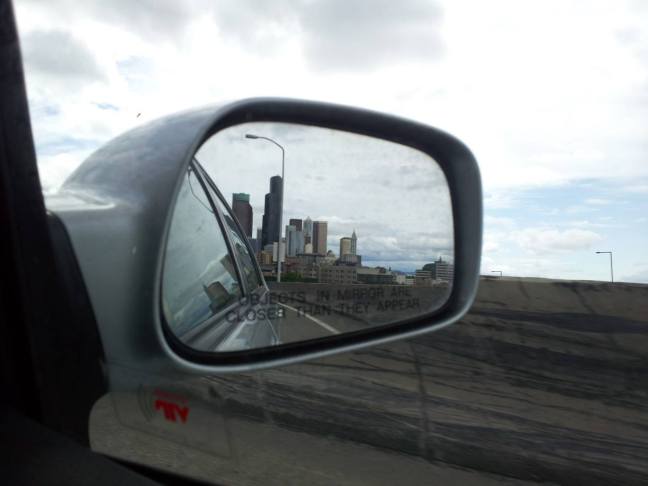 Today marks one month since I moved back home to Cascadia after four years in the American Midwest. I left my home in Seattle just two weeks after getting married to my longtime boyfriend (whose graduate schooling was the reason for our move). We both were sad to leave this place in which we began making our life together; a city which truly felt like home since our first morning living here. We left knowing we would be back someday. I snapped a picture of Seattle’s skyline through our car’s side mirror as we drove east. The notice on the bottom which read “objects in mirror are closer than they appear” suddenly seemed poetic.

I’ve spent these past years of my life split between the sprawling metropolis of Chicago and the rolling hills of southern Minnesota. I made some great friends and explored many new places which I would likely have never otherwise visited had we not moved. I’m thankful for many of these experiences. Yet, throughout this entire time period, I felt at many times an overwhelming sense of being out of place, like an alien in a foreign land.

I missed home terribly during these years. I can’t recall how many times I listened to The Lonely Forest’s “I don’t want to live there” to help cope with this feeling. I was lucky enough to fly home about once a quarter for work as I was able to keep my Seattle-based job and work remotely. I silently rejoiced each time I realized the plane was crossing over the Rocky Mountains into Cascadia flying west. Likewise, I silently lamented each time it crossed over those same mountains flying east, revealing a seemingly endless landscape of flat prairie lands.

When we made our drive back a little more than a month ago, I remember the exact moment I knew I was home. We left Salt Lake City heading north on hot and dry Wednesday morning. We drove past a rocky landscape of red-gold southwestern desert for hours. Then, we arrived at the southern mountains bordering the Snake River Plain in Idaho. Red and gold gave way to green as we crossed the mountains and onto the plateau. I didn’t need to reference a map to confirm what I knew to be true at that moment: the bioregion of Cascadia revealed itself in plain sight. We still had a ways to go before we got back to Seattle, but I was home.

I know what I have to say next may sound ironic at first, but keep going with me. When I look back on the last four years of my life, I’m thankful for my experiences living apart from this place I love. Don’t get me wrong: I’m beyond glad that I’m home. But I was able to really experience both the vast differences and some similarities between living in Cascadia and living in the American Midwest which I otherwise would have been ignorant of.

You see, not only did I leave Seattle shortly after getting married, I also left shortly after finishing the 2nd draft of my book. During the following two years, I was able to take a very hard look at the arguments I had made regarding the effects of bioregionalism—the phenomenon of the physical characteristics of place (a bioregion) shaping the identity of society in both tangible and intangible ways. As I worked through my 3rd draft, I felt many of my arguments held up well while some others did not. I ended up removing about a third of my work and adding or re-writing even more. In the end, I had a near-finished product which I was proud of and, more importantly, said what I truly wanted to say in the most coherent and rational sense possible.

It took me almost another year to finalize a 4th draft which was then published. I can confidently say this final published work would not have been possible if it weren’t for my time spent living outside of Cascadia. I was able to both reflect on and appreciate home so much more because of my experiences, and I am truly grateful for this.

We’re now (mostly) settled once again in the Emerald City. I look forward to spending many, many more years living in and exploring this wondrous region. There’s still so much I haven’t seen: the archipelago of the southeast Alaska, the valleys of the Fraser Plateau and south-central BC, the mountains of Missoula, Cascadia’s coast in southern Oregon and northern California, and more. As the song goes, “I just want to live here, love here, and die here.” Although I hope that latter part doesn’t happen for a very long time; I’ve got too much to love and live for in Cascadia.

Interested in learning more about Cascadia? You can buy your copy of Towards Cascadia today: