Cascadia is the name of the environmentally and culturally distinct region of the Pacific Northwest. Its borders stretch from the Canadian Rocky Mountains and the Great Continental Divide in the east to the Pacific Ocean in the west, from Cape Mendocino, the edge of the Great Basin, and the Snake River Valley in the south to Mt. Logan in the north. It encompasses all or most of British Columbia, Washington, Oregon, and Idaho. It also encompasses parts of Alaska, California, Montana, Nevada, Utah, Wyoming, and the Yukon Territory.

Within these borders is a unique society of over 18 million people bound together through ecology and shared civic values. Although currently separated by the international borders of Canada and the United States, the distinguished Cascadian identity perseveres. This identity is beginning to solidify itself as the dominant ethos in the region once again after more than a century and a half of being overshadowed by attitudes of imperialism. Just as the natural elements helped forge a coherent region of native tribes prior to western settlement, the influence of the land itself is uniting its people—American and Canadian alike—as one society, differentiating its character from the rest of the continent. 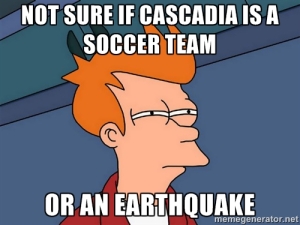 10 Questions About Cascadia You Were Too Embarrassed to Ask

You’ve read or heard things about “Cascadia”, but you’re not exactly sure what they all mean. There are probably some questions you want answered, but may have just not asked yet. Here are 10 frequently asked questions about Cascadia.

Interested in learning more about Cascadia? You can buy your copy of Towards Cascadia today: